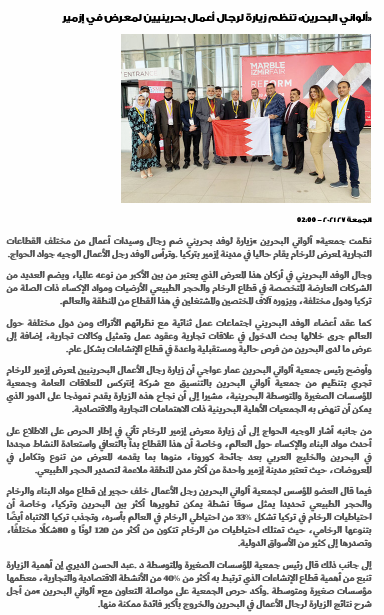 Alwani Bahrain Society organized a visit for a Bahraini delegation that included businessmen and women from various commercial sectors A marble exhibition is currently being held in Izmir, Turkey. The delegation was headed by notable businessman Jawad Al-Hawaj.

The Bahraini delegation toured the corners of this exhibition, which is considered among the largest of its kind in the world, and includes many Among the exhibitors specialized in the marble, natural stone, flooring and related materials sector from Turkey It is visited by thousands of specialists and workers in this sector from the region and the world.

Members of the Bahraini delegation also held bilateral working meetings with their Turkish counterparts and from different countries around the world During which they discussed entering into commercial relations, work contracts, representation of commercial agencies, in addition to presenting what I have Bahrain has promising current and future opportunities in the construction sector in general.

For his part, Al-Wajeeh Al-Hawaj indicated that the visit to the Izmir Marble Exhibition comes within the framework of keenness to see On the latest building and cladding materials around the world, especially as this sector has begun to recover and regain activity again In Bahrain and the Arabian Gulf after the Corona pandemic, he noted the diversity and integration offered by the exhibition, Where the city of Izmir is considered one of the most suitable cities for the export of natural stone in the region.

While the founding member of the Bahrain Alwani Society, businessman Khalaf Hajeer, said that the building materials, marble and stone sector Natural resources, in particular, represent an active market that can be developed further between Bahrain and Turkey, especially that the marble reserves in Turkey accounts for 33% of the marble reserves in the entire world, and Turkey also attracts attention with its marble diversity, It has marble reserves of more than 120 colors and 80 different shapes, and exports them to many from international markets.

In addition, the President of the Small and Medium Enterprises Association, Dr. Abdul Hassan Al-Diri said that the importance of the visit stems from the importance of the construction sector, with which more than 40 . are associated % of economic and commercial activities, mostly small and medium enterprises. He stressed the association's keenness to continue cooperating with "Alwani Bahrain" in order to explain the results of the visit to the men Business in Bahrain and get the largest possible benefit from it.