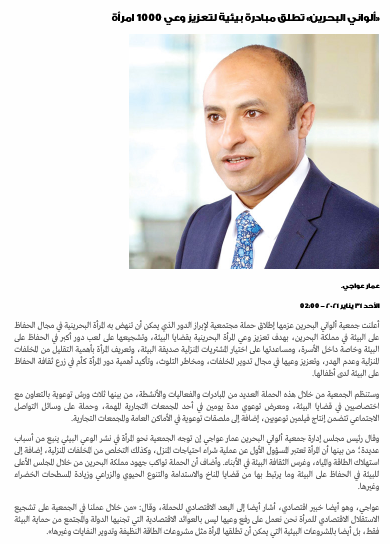 Alwani Bahrain Society announced its intention to launch a community campaign to highlight the role that Bahraini women can play in the field of environmental preservation in the Kingdom of Bahrain, with the aim of enhancing Bahraini women’s awareness of environmental issues, encouraging them to play a greater role in preserving the environment, especially within the family, and helping them to choose Environmentally friendly household purchases, introducing women to the importance of reducing household waste and not wasting, enhancing their awareness of waste recycling and pollution risks, and emphasizing the importance of the role of women as a mother in cultivating a culture of environmental preservation among their children.

Through this campaign, the association will organize many initiatives, events and activities, including three awareness workshops in cooperation with specialists in environmental issues, an awareness exhibition for two days in an important shopping mall, and a campaign on social media that includes the production of two awareness films, in addition to awareness posters in places Public and commercial complexes.

The Chairman of the Board of Directors of Alwani Bahrain Society, Ammar Awaji, said that the association’s orientation towards women in spreading environmental awareness stems from many reasons; Among them, women are primarily responsible for the purchase of household needs, as well as the disposal of household waste, in addition to consuming energy and water, and instilling environmental culture in children. He added that the campaign keeps pace with the efforts of the Kingdom of Bahrain through the Supreme Council for Environment in preserving the environment and related issues of climate, sustainability, biological and agricultural diversity, increasing green areas, and others.

Awaji, who is also an economist, also referred to the economic dimension of the campaign, and said: “Through our work in the association to encourage women’s economic independence, we are working to raise their awareness not only of the economic returns that the state and society derive from protecting the environment, but also of environmental projects that can To be launched by women, such as clean energy projects, waste recycling, and others.”